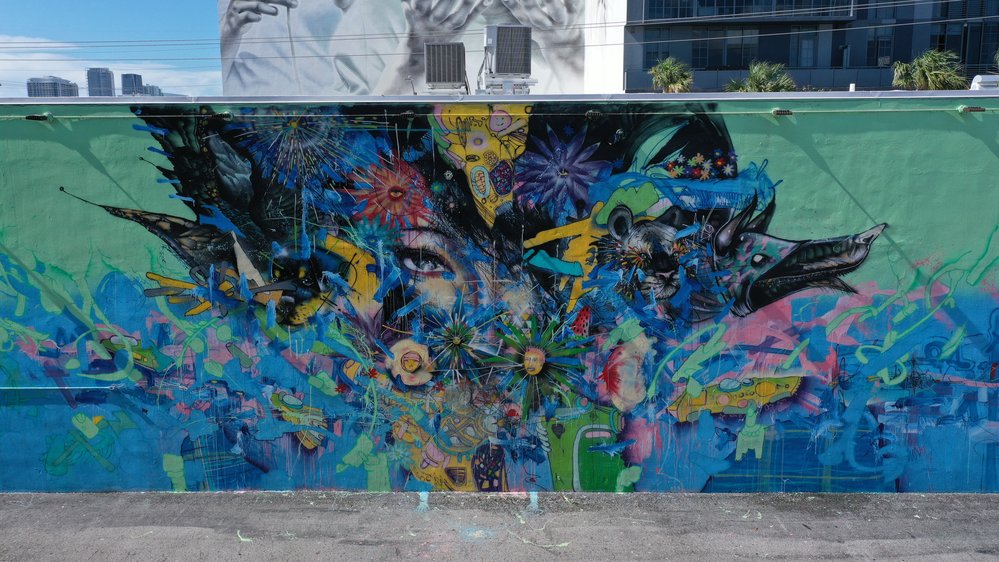 DAVID CHOE , is an overall creator of art in many capacities, whose work has transcended the street art world. DAVID CHOE has successfully made the jump from the art world to the world of media. Both in front of and behind the camera. He's been featured on "Anthony Bourdain: Parts Unknown". He had his own reality show on HBO's Vice TV, "Thumbs Up" where he hitchhiked and freight hopped through America. It is well documented that CHOE was the the artist solicited by Mark Zuckerberg to paint a mural in the first Facebook office in 2005. In lieu of a cash compensation, CHOE elected to take stock options as preferred method of payment. In 2012 when Facebook went public, the stock was valued at $38 a share and his options were valued at $200 million dollars.

This mural that CHOE painted in 2017, depicts an organized chaos, similar to the organized chaos of the internet. Notice the different animals, pumas, butterflies, wings, faces, as well as random eyes scattered throughout the murall. "Because big brother is always watching." The chaos is centered and condensed.

Off to the bottom right, CHOE painted a portrait of Martha Cooper, a famed street art photographer. She is the

co-author (Henry Chalfant) of "Subway Art". A book considered a Bible by many graffiti artists. This book documented the then, VERY underground culture of illegal subway graffiti. MARTHA is the official photographer of the Wynwood Walls.

CHOE painted MARTHA with her traditional outfit, camera and equipment strapped over the shoulder as per usual. CHOE cleverly added a kitty cat due to Martha's passion for cats. He also painted his whale character MUNKO aka MUCKOCHOE. A recurring theme prevalent in CHOE's work.