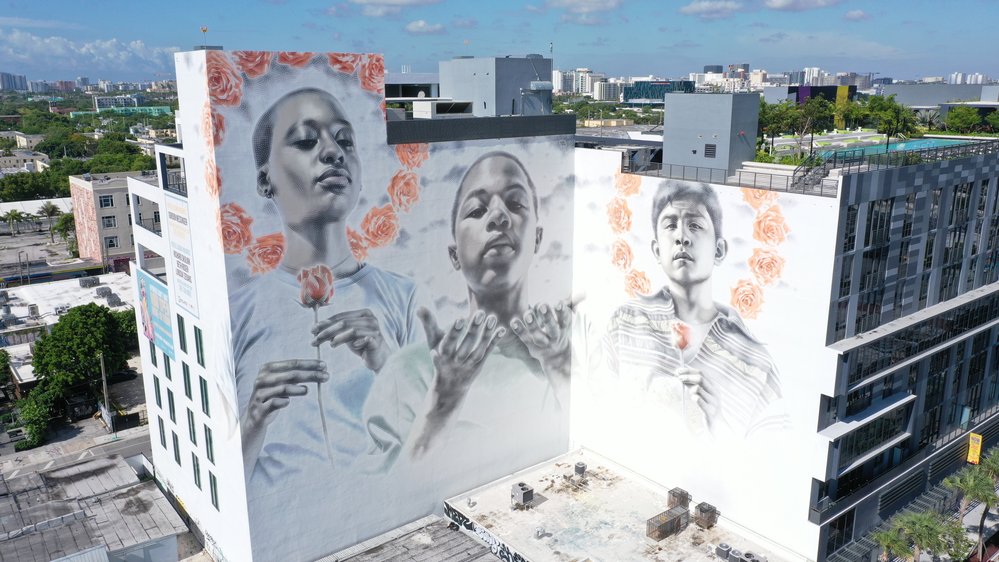 EL MAC is an internationally renowned artist born and based in Los Angeles. He began painting both indoor works as well as public murals and graffiti in the mid '90s. Since then he developed a unique visual aesthetic and rendering style which utilizes repeating contour patterns. His work draws on influences from classical European art, social realism, symbolism and devotional art, as well as the Chicano and Mexican culture he grew up around. He is best known for his meticulous paintings and large-scale murals exploring feminine beauty and honoring ordinary, overlooked, or marginalized people.

This mural was pained by El MAC over a duration of over 5 months with no assistant. Dealing with the Miami heat and the erratic weather. He painted from dusk to dawn on a swing stage. Using only spray paint. With the help of a photographer, El MAC was able to attain pictures of local folks for references.

The image on the left is "Mandolina", a young woman who runs a nearby community garden. The figure in the middle "Jamaii", is a young ballet dancer. The figure on the right named "Kyle" is a local Seminole boy.

One of the largest permanent murals in Wynwood, Miami, commissioned by The Related Group. 2019 Aerosol enamel on concrete